Busey is proud to announce it has been named the recipient of the 2021 Community First Award by the Federal Home Loan Bank of Chicago. 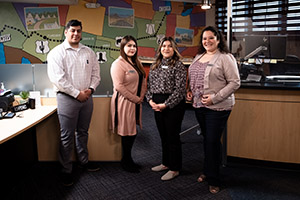 The impact of the branch on the Fairmont City community has been evident. Prior to its opening, residents relied on grocery stores and check cashing establishments for their financial needs. Now, residents in the town of 2,500 people have a full-service bank—a place to cash checks, open checking accounts, save money, receive loans for cars and realize the dream of home ownership.
According to Karlos Ramirez, the Executive Director of the Hispanic Chamber of Commerce of Metropolitan St. Louis, the Hispanic population is the fastest growing population in the St. Louis area. With the branch located just five minutes from the Gateway Arch, St. Louis community organizations who serve the Hispanic population were thrilled to have a bank to send their clients to with associates who fluently speak their language. Since its inception, the Fairmont City branch has filled a significant gap not only in its community, but for the growing Spanish-speaking population throughout the entire metropolitan area.
Busey was recognized in a FHLB of Chicago video at its virtual member meetings on April 13 and April 29. Sandy DeMond, Senior Vice President – Co-Director of Community Banking, who was instrumental in the establishment of the Fairmont City branch, was featured in the video.
In addition to the honor that comes with winning the award, Busey also receives a $10,000 grant from the FHLB of Chicago to donate to a non-profit, or several non-profits, of its choice.
Swipe for more